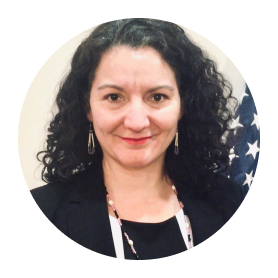 Michelle Sauve, an enrolled member of the St. Regis Mohawk Tribe, is the acting Commissioner of the Administration for Native Americans (ANA), an agency within the U. S. Department of Health and Human Services. ANA promotes self-sufficiency for NativeAmericans by providing discretionary grant funding for community-based projects as well as training and technical assistance.

As acting Commissioner, Ms. Sauve also serves in the dual role of the Deputy AssistantSecretary for Native American Affairs (DAS), affirming the government-to-government relationship between the Administration for Children and Families (ACF) and Indian tribes.

In addition to her roles as acting Commissioner and acting DAS, she serves as the Executive Director of the Secretary's Intradepartmental Council for Native American Affairs (ICNAA) at the US Department of Health and Human Services (HHS). As the Executive Director for theICNAA, she provides coordination across the Department, and supports the ANACommissioner and the Council in cross-program collaborations and coordination on policy impacting Native Americans within HHS.

Ms. Sauve is also the Intergovernmental Affairs Specialist in the Office of the Commissioner at ANA. Her work includes providing policy and program advice across a variety of issues that impact Native American communities. Currently she is leading an HHS-wide subcommittee addressing missing and murdered Native Americans through a public health prevention framework. In addition, she helps ANA collaborate across federal agencies via participation on various work groups and interagency initiatives. She has been at ANA since December 2010, and previously worked as the Senior Project Consultant and Communications Lead as a contractor for ANA.

Ms. Sauve's previous experience includes providing training and technical assistance to American Indian and Alaska Native Head Start programs, as part of the Office of Head Start Technical Assistance Network from 2006-2010. Ms. Sauve has also provided direct program management in higher education for the Washington Internship for Native Students atAmerican University. She has raised program funds, managed federal, state, and foundation grants, and directed staff as the Executive Director for the Commonwealth TenantsAssociation, a public housing development in Boston, Massachusetts. Prior to that, she served as a Case Manager and was promoted to Project Manager for families receiving childcare subsidies through the Child Care Development Block Grant in California. She has a degree in American Studies from the University of California at Berkeley, where her honors thesis was a comparative analysis of the impact of gaming in three tribal communities. She also holds a Masters degree in Public Policy from Harvard University.